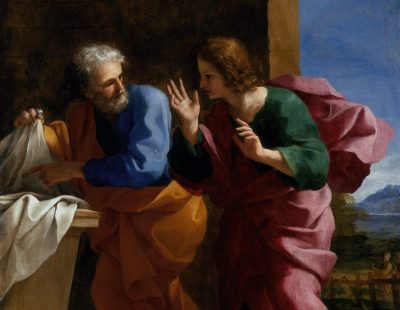 “Sabbath was over:”  The women could do nothing on the Sabbath—Saturday.

“First Day of the week “ :  In Genesis , Sunday  is the day of creation; the day God created by his Word;  the day the Spirit hovered over the waters and life began.   Already in the first verse  of Genesis we have the Blessed Trinity active in creation.  On the first   day of the week after the Sabbath  ( notice  how Jesus in the tomb  rested  on the Sabbath )  the Blessed Trinity is  active again.

“ Struck with amazement “  The women are in a state of confusion—the disciples had not understood the  scriptures about Jesus rising from the dead.

“ No need for alarm “ Words of reassurance—it always is  the first  message that angels give to   men and women—do not be afraid.

“Jesus of Nazareth-crucified; risen;   he is not here “  The angel in the tomb sums up  the entire achievement of Christ

“ The women run away terrified “  The empty tomb leaves them frightened out of their wits.  As Mark tells the story,  understanding and faith have still to come.

”As Christ  was raised from death, we might live a new life “   We join Christ in death by baptism, then  we join  him in the new life of Baptism and resurrection.

“You must consider yourselves to be dead to sin but alive  for God  in Christ Jesus  “  As far as Paul is concerned, we are  already  living the life of the resurrection. It is the teaching of sacred scripture that the only  way to   the Resurrection is  to die in union with the death of Christ. And the sacrament of Baptism, strengthened   and nourished by the other sacraments ,  is the link both  to his crucifixion and resurrection.

The Catechism of the Church teaches : “ Because of Christ, Christian death  has  a positive meaning —  “ for me to live is Christ, and to die is gain “   What is essentially  new about Christian death is this: through Baptism the Christian has already  died with Christ sacramentally, in  order to live a new life,  and if we die in God’s grace,  physical death completes this “  dying with Christ “  and so completes  our incorporation into him in his redeeming act.” ( Catechism: para 1010 )

The graces of Baptism are not just to live a holy life in this world,  but at the end of the day, they point to that final hour when you are really united with Christ crucified in your own death, which will then ( God -willing )  be the prelude to your own  resurrection

That means, according to the  Catechism, your Baptism finds its completion and fulfilment  when you die .  What a wonderful  consolation as we face death  –the completion  of the Sacrament of Baptism.

This is  why  Easter, the mystery of the life , death, and resurrection of Christ,  linked with the Sacrament  of our own  Baptism, is called the Feast of  Feasts