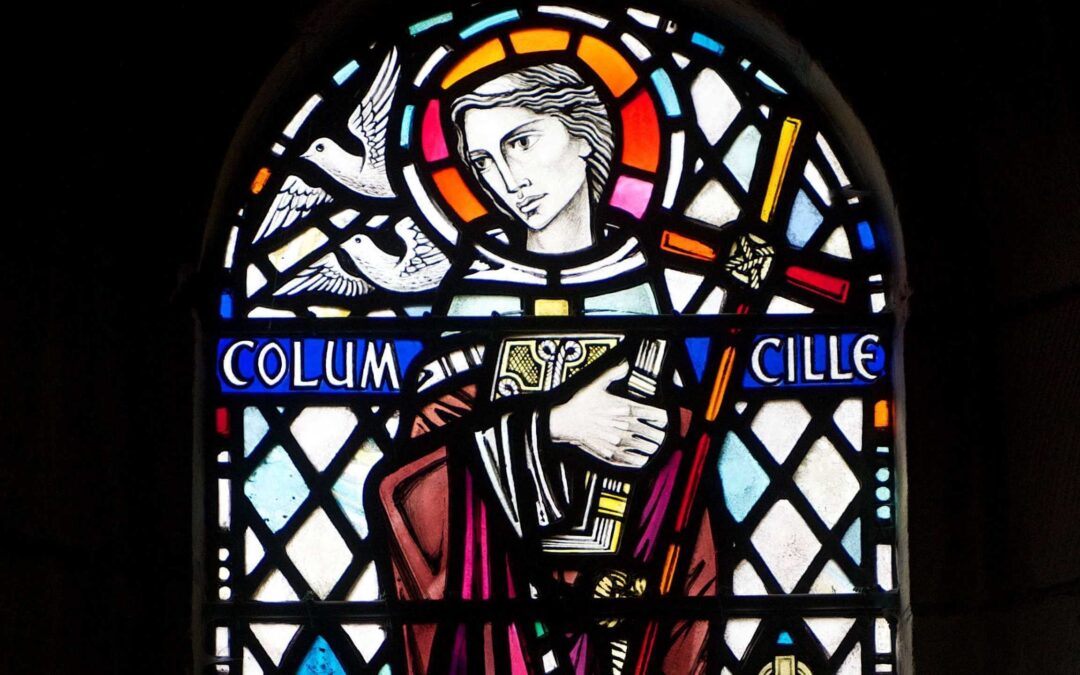 Known in Ireland as Colum Cille, he was born in Co Donegal in 521. Closely related to the High King of Ireland, he decided to serve the Lord in the priesthood rather than follow royal ambitions. He founded many monasteries in Ireland, his family of monasteries succeeding to the former older institutions of St. Patrick. He is said to have founded a hundred monasteries–hence his title: Colum Cille –Colum of the Churches In Scotland he is known as Columba, which in Latin means Dove. For this reason he is often depicted cuddling a bird—- many of the Celtic saints were very closely connected with nature and animals. It is one of their charming attractions–green in more ways than one–even ecologically.

Why did he come to Scotland? In many ways he was in his own community–the Scots or Irish lived in that part of the country then called Dalriada. There is a story, and no more than that, that he was visiting his uncle’s monastery who had just received a copy of the newly translated Book of Psalms by the famous St. Jerome, the translator of the Vulgate Bible in Latin, to this day the official Latin version of the Bible in the Church.

While staying with his uncle, Columba, without his uncle knowing of it, sneaked into the library during the night and copied the Book of Psalms, then left the monastery with the new copy in his baggage. When the uncle found this out, he demanded it back, saying the copy belonged to him. Columba refused. It was taken to the judgement of the High King, who ruled: to every cow her calf, to every book its copy. The story may or may not be historic.

He left Ireland and arrived in Iona in 563. He was forty two years old ,coming as a pilgrim for Christ, the great ambition of the Celtic monks It was called in Latin: “perigrinatio pro Christo “ When he arrived In Iona in many ways he was among his own people, as Dalriada at the time was inhabited by Scots or Irish. The Celtic monks lived in communities of separate cells but were also enthusiastic missionaries, travelling around the Islands, founding small monasteries and also going inland, spreading God’s Word to the Picts and others. Even though he lived in Iona, he often travelled to Ireland as well, keeping an eye on his Irish foundations. Among his other gifts, he was an accomplished sailor and a poet.

Adomnan, a later Abbot and his biographer and Abbot, tells us he devoted himself to the Christian combat and search for wisdom. By God’s grace, he preserved integrity of body and soul, so that he seemed like one ready for the life of heaven though still on earth. In appearance he was like an angel; refined in his speech, holy in his works, pre-eminent in character, great in counsel. Night and day he so unwearlngly gave himself to fasts and vigils that the burden of each single work seemed beyond the strength of man. Yet through it all he was loving to everyone, his holy face always cheerful, and in his inmost heart he was happy with the joy of the Holy Spirit.

As his end approached, he was first in the church for the midnight office of Matins. He knelt down in prayer before the altar. His attendant, Diormuit, followed. The rest of the community then came in with lights and began to lament when they saw that their father was dying. Diormuit raised the saint’s holy hand to bless the brethren. At the same time the venerable Father himself moved his hand as much as he was able and blessed the assembled monks . Immediately after the holy blessing, he breathed his last . It was June 9, 597.

As the Vikings ravaged the Western Isles, the monks took his body to Dunkeld to be buried there. The ruins of the ancient Cathedral mark his final resting place. The Patron of our diocese of Dunkeld, Columba is one of our greatest saints.